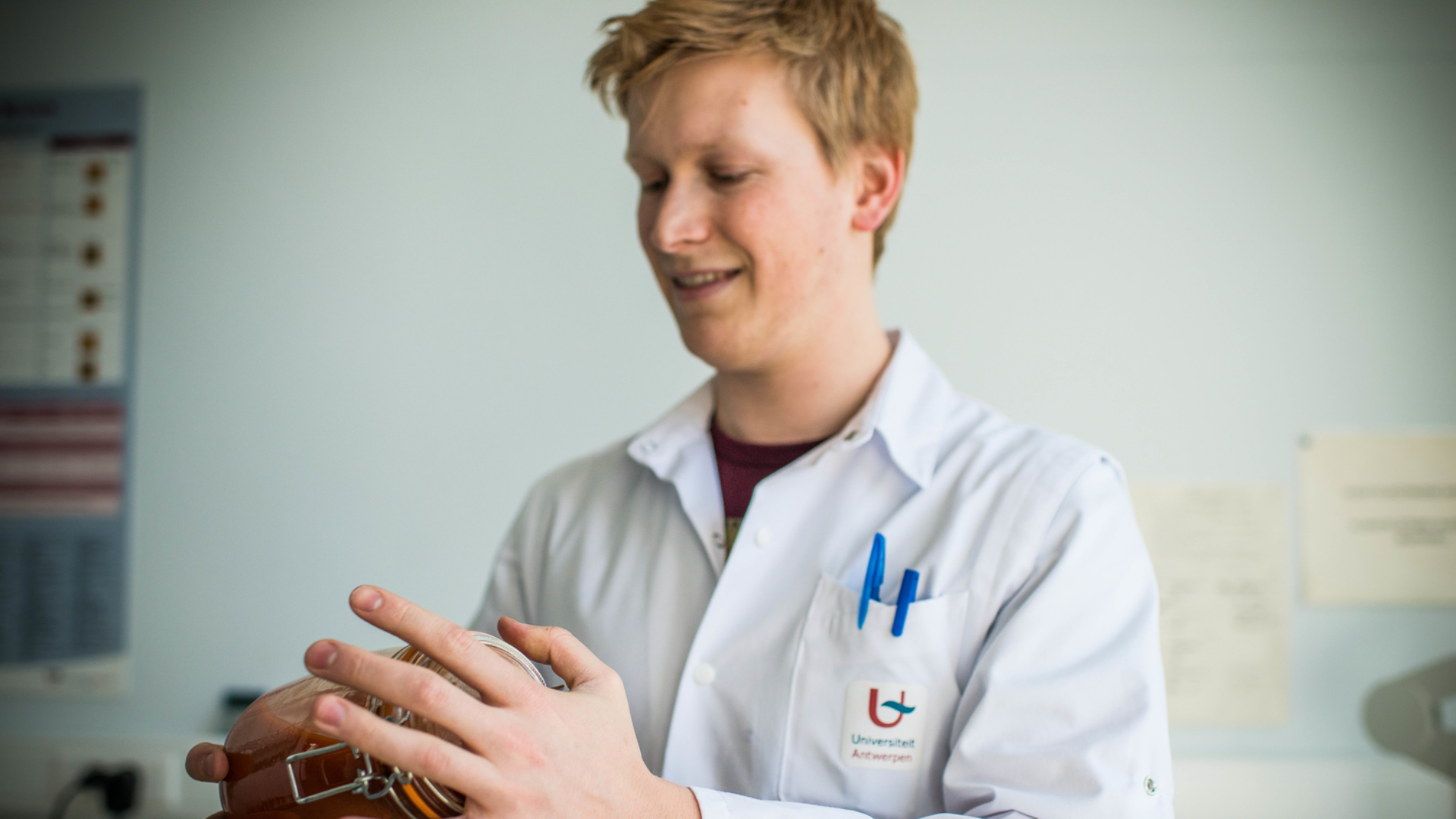 You should know that I’m a real DNA-junkie. When I heard about DNA the very first time in high school, I was really baffled with the fact that it can carry so much information just by repeating A, C, G and T’s in a very long string. It contains the blueprint for almost every important molecule and protein of a living cell. I really think of DNA as the base of life. In the end, this interest in DNA, made me join the KU Leuven iGEM team in 2013 and led me to pursue a PhD in computational microbiology with a focus on molecular techniques.

In addition, like the rest of the world, I’ve discovered the magic of cryptocurrencies about half a year ago, and got excited by especially the theory behind it. Thus, when I read the following tweet, it goes without saying that I was extremely enthusiastic. I still remember myself announcing to all of my colleagues that we should drop everything we’re doing and start solving this challenge:

Back in 2015 we issued a challenge: read digital info written in DNA & win 1 bitcoin. The prize has increased in value recently, but there's <50 days left to have a go! Read more at https://t.co/sDADX7OnX8 pic.twitter.com/2g9sCsS61A

This competition was launched almost three years ago at the World Economic Forum Annual Meeting in Davos on 21 January 2015. Prof. Nick Goldman gave a presentation about their Nature publication that showed how to store computer files on strings of DNA. You can find the complete presentation on YouTube. At the end of the talk, a sample was handed out, which contains the necessary information to claim the Bitcoin.

Now, just over one month later, I’m pleased to announce that I obtained one of these samples, decoded the DNA and successfully claimed the Bitcoin!

In this blogpost I will give a summarised technical explanation on how I cracked the code together with the help of some of my colleagues. A detailed report stating the full process of the decoding/encoding system designed by Nick Goldman et al. can be found here.

It’s been quite a ride!

The first thing we realised is that the hardest part of this challenge could be obtaining a DNA-sample. I knew that they handed out samples at the Davos meeting, but no other DNA-samples were spot in the wild since then. I tried using my Twitter network to get hold of one:

Anyone still has a test tube with DNA from that presentation laying around? I'm more than happy to help you sequence it! 👌 https://t.co/Ca04PsQQyg

However, one day later, I received a direct message from Prof. Goldman himself who told me that if I have a good set of reasons and if I’m qualified for the job, he might send over a DNA-sample. I drafted an e-mail and one week later we were very lucky to receive an interesting package:

In our lab we’ve got quite some experience in 16S rRNA (microbiome) and whole genome bacterial sequencing. Moreover, we have direct access to a MiSeq, so sequencing the sample seemed to be very doable. Especially with the support of my colleague Eline, who helped in choosing the best kit for the job and loaded the MiSeq at the Center of Medical Genetics (University Hospital Antwerp). If you’re interested in the details: in the end we used a 2 x 75 bp (150 cycle) V3 MiSeq sequencing kit, we reached a cluster density of 1,108 ± 12 K/MM² with 23 million reads passing filter. The total yield was 3.41 Gbp.

Special thanks to Illumina who were so kind to provide us a free kit for this great adventure!

I was especially excited to learn that almost all sequences started with either T or A. This is a property designed to make sure that the reads were decoded in the right orientation.  Other graphs (not shown here) showed that the reads had the expected length of 117 nucleotides and that no undefined bases (N) were detected.

Before I started the real decoding process, I wanted to reduce the amount of reads in order to save some of that precious computation time. Therefore, I wrote a bash script that performs the following steps:

In addition, as stated above, reads should start with either a T or an A. If not, that means that the orientation of the reads was changed due to e.g. PCR amplification. The reverse complement of that read should be taken. This was all handled in a bash script with these key steps:

This is where the real fun starts! The whole encoding process is summarised here below. As stated in the supplementary file of the Nature paper, decoding is just the reverse of encoding:

After I’ve split up the indexing information in these three sub parts, I needed to translate these from DNA to the ternary system according to the following scheme:

That’s how I ended up with 3 different ternary numbers (ID, index and Parity trit)  which I subsequently translated into the decimal system et voilà. This was the first time I laid my eyes on information decrypted from the DNA which was completely understandable for me. After checking the parity trit checksum, I could figure out how many reads per sample we had:

From this graph I learned that 5/9 files were very well sequenced, while 4 of them definitely show a much lower read count. This result was quite exciting to me as I only expected one single file. Time to get to the real decoding!

This was definitely one of the most tricky parts of the challenge for several reasons:

After all of this, I ended up with one long string of DNA per file. In theory we are now only one step removed from finally reading out the content of the files.

In this very last step we just need to take our final long DNA-sequence, convert it to trits according to the scheme described above ( 5. Decoding part I) and then convert those trits back to their original bytes using a Huffman code, which was provided in the original manuscript. All of this is implemented in a Python script which I obtained from this interesting Github Repository by Allan Costa. However, the Python script was still based on the 2013 methods, so I updated it to include the 2015 additions.

When running this script on my long DNA-strings, I quickly realised that their quality was far from good. I manually had to remove some homopolymers to get the script running and it produced an output that did not make any sense to me.

At least I did figure out that ID8 was a probably a JPEG-file due to the fact that it started with FF D8 FF E0.

Back to the drawing board.

At this time, I’ve already spent 4 weeks trying to decode this thing and it was frustrating to realise that the crucial assembly step was just too erroneous. In addition I already started to think that we did not sequence deep enough and that we would never be able to get something useful out of the data.

I decided that I’ve been doing too much work myself and that an extra pair of eyes could be useful. Fortunately, my colleague Stijn was eager to help me out again and we decided to organise a small hackathon on Saturday with the two of us. During this hackathon he wrote two new algorithms which could potentially make a less error prone final assembly. He also wrote those implementations in Python (he’s a smart guy), making them at least 1 bazillion time faster than my R algorithms. However, we both were a little bit disappointed that it did not seem to solve our problem as the final DNA-sequence still seemed to be too erroneous. Again we started to think that the quality of the data just was not sufficient enough.

Despite this setback, we still managed to make some progress. One of them was the realisation that one text file (ID0) was still encoded in hexadecimal. So after manually removing all the homopolymers, decoding using the Python script, we’ve put it trough an online translator:

We were psyched! This was the very first time we managed to get a readable result out of our erroneous DNA-assemblies. However, the result was definitely not good enough as the bitcoin’s private key was still full of unreadable characters. We had to get a better assembly.

The most crucial turning point definitely was my realisation, after a discussion with Stijn, that I was probably filtering a little bit to stringent in one of the previous steps. In that step I only kept the read with highest count per index per file ID. I did this to reduce computation time as my precious R-scripts did not manage to process the full dataset in a decent amount of time. As soon as I realised this, I removed this filtering step and reran the whole analysis overnight.

The next day I had a look at the results. Did my usual manual check for homopolymers and to my surprise only a few were found. I ran the final decoding script without any errors, which was also new to me. And there it was. The very first fully decoded file without any obvious errors:

At this point, I spent the next 20 minutes trying to figure out how to sweep the bitcoin to my own wallet, in which I succeeded.

The challenge was finally over, after almost three years.

Of course, I was a little bit curious what the other encoded files looked like. I only managed to decode files with ID0 (the one above), ID1, ID4, ID5 and ID8. (UPDATE: After further inspection, it actually looks like the reads with these indices are all erroneous. This was confirmed by Prof. Goldman). The files I managed to decode looked like this:

The raw sequencing data can be downloaded here.

The whole pipeline can be found on my Github page.  I should warn you, most of the code is written in R which is extremely slow in handling strings. I challenge you to do better!

Stijn’s Python implementation of the DNA-assembly step can be found on his GitHub page.

Jean Peccoud also wrote a script in R to decode everything. Find his solution here.

You never reach something on your own. A sincere thanks to the following people:

186 thoughts on “From DNA to bitcoin: How I won the Davos DNA-storage Bitcoin Challenge”